(Major excerpts of this blog entry came from the Los Angeles Times article, “These boxes are a billion-dollar industry of homesickness for Filipinos overseas” by Frank Shyong, April 2018)

Will Dix packing thousands of books into balikbayan boxes (September 2018)

On September 2018, Will Dix and I packed thousands of used books bound for in Giporlos, Samar, and Iligan City, Lanao del Norte. Today balikbayan boxes, named after the Tagalog word for a returning Filipino, have become one of the most enduring symbols of the Filipino diaspora. The boxes help feed relatives who are struggling, console daughters separated from their mothers, and give far-flung overseas workers a tangible tether to their families.

How many balikbayan boxes are sent to the Philippines year?

With over 10 million Filipinos working abroad in the US and around the world, at least 400,000 balikbayan boxes are sent every month, according to the Door to Door Consolidated Assn. of the Philippines. That’s approximately 4.8 million balikbayan boxes every year becoming a billion dollar industry. The number of boxes being sent drastically increases during the holiday season.

Amy Guzman, who will be visiting her family in the Philippines, packs two balikbayan boxes full of things such as toothpaste, Spam, hand-me down clothes and rice at her home in Long Beach. (Allen J. Schaben / Los Angeles Times, April 2018)

What’s inside a typical balikbayan box?

The balikbayan boxes are usually packed with gifts such as Kirkland chocolates, hand-me-down clothes and Spam for relatives overseas.  Amy Guzman, who will be visiting her family in the Philippines, displays the contents of the two balikbayan boxes she will take to her family (Los Angeles Times, April 2018). Here’s what’s inside:

Chocolate: Chocolates, and many other kinds of sweets, are one of the most common balikbayan box items. Common brands like Snickers and M&M’s are highly desirable, and more expensive candy brands like Ferrero Rocher are comparatively affordable in the U.S., and they can be purchased cheaply, in bulk, at American stores like Costco.

Colgate, Crest and Secret deodorant: American brands like Colgate and Crest seem like mundane inclusions, but they are especially desirable in the Philippines, where a history of U.S. colonization has shaped consumer tastes.

Purses, perfumes and makeup: Boxes also contain more traditional gifts from overseas Filipinos who want to share their relative wealth with their less fortunate family members back home. The peak of the balikbayan box season is always Christmas.

Backpack, towels and sheets: A balikbayan box is typically preceded by weeks of communication between overseas Filipinos and their relatives in the Philippines to try to learn about the needs and wants of each of their family members. Guzman has included a backpack, towels and a comforter according to her family’s needs.

The boxes: Large door-to-door balikbayan box companies like Atlas, Forex, LBC, and Starkargo have professionalized the practice of sending balikbayan boxes via shipping container or airmail. Shipping a box costs anywhere from $40 to $80, and it’s often cheaper to send boxes to the Philippines through these services than it is to send it across the street using U.S. carriers. 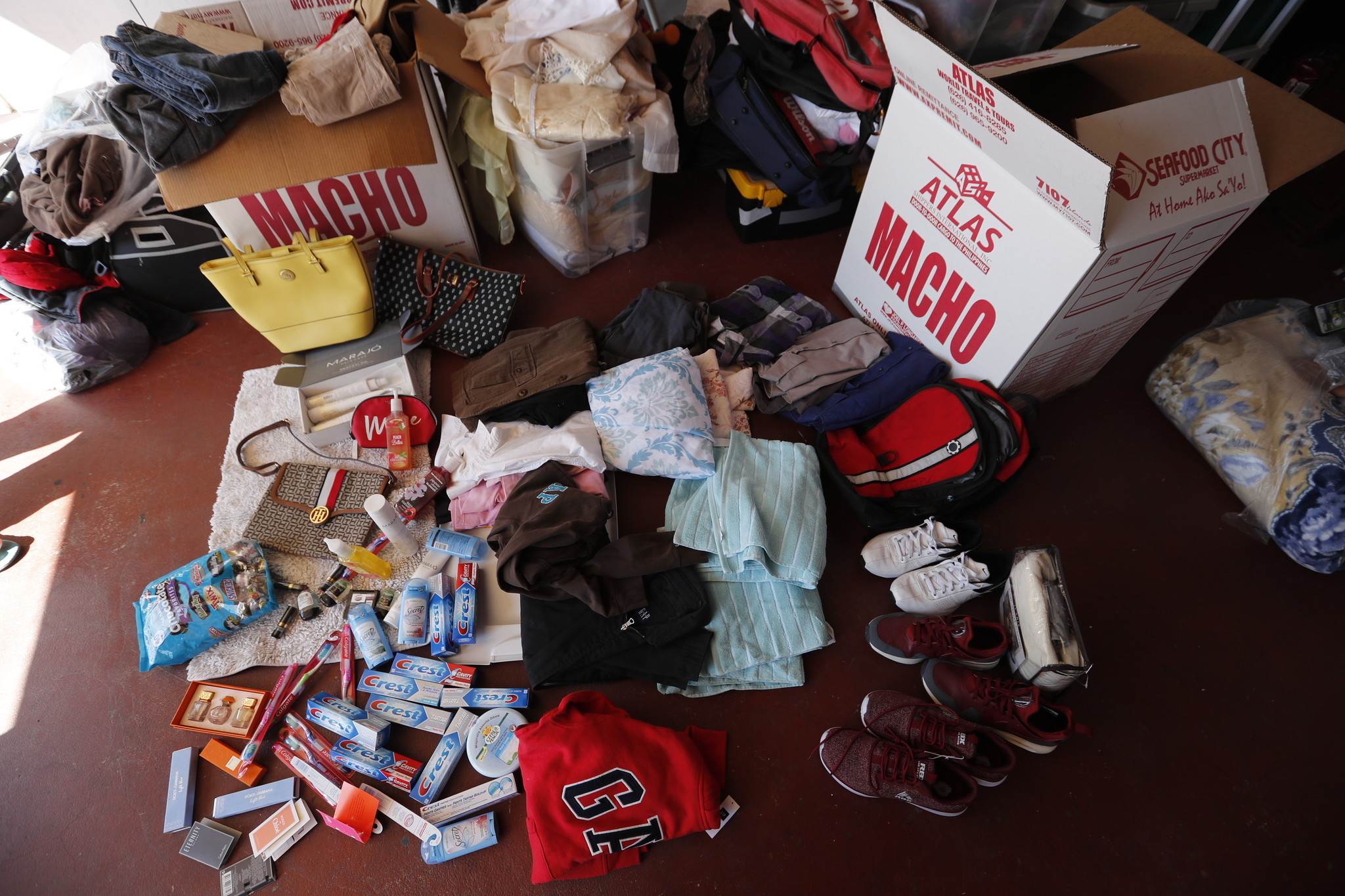 The contents of Amy Guzman’s two balikbayan boxes at her home in Long Beach, CA.

Why send these balikbayan boxes in the first place?

“This is the Filipino way. You can’t go home without a box,” Marie Maruquin of Los Angeles replied.

“There are many who spend their entire lives as caregivers, and the boxes are sometimes their only remnant of a home in the Filipino community,” said Anthony Ocampo, a professor of sociology at Cal Poly Pomona and the author of “The Latinos of Asia: How Filipino Americans Break the Rules of Race.”

The 1970s brought high unemployment to the Philippines and a state-sponsored effort to export labor around the world. Thousands of Filipinos like De La Cruz accepted vast distances from their families as a requirement for survival.

For many overseas Filipinos, balikbayan boxes became the best way to bridge that distance. De La Cruz, who worked as a domestic helper in Hong Kong, scrimped and saved to put dresses, chocolates and toys in her children’s care packages.

The practice was formalized by an official government initiative to encourage returning Filipinos, or balikbayans, to spend their foreign wages at home in the Philippines. Tourism officials offered reduced airfares on the then-government-owned Philippines Airlines, hotel discounts, tax breaks and, most important, generous baggage allowances.

Returning foreign workers, who earned far more than their relatives could back home, needed to bring so many gifts that they soon quit using luggage in favor of large cardboard boxes, which could be packed to the very limit of an airline’s weight allowance.

The balikbayan promotion was supposed to last only six months, but the profitable initiative was extended repeatedly until it became permanent. In 1987, the government officially waived taxes and duties on goods in balikbayan boxes. Around that time, in Los Angeles and other Filipino enclaves in the U.S., entrepreneurs like Rico Nunga, 60, began to offer door-to-door delivery of balikbayan boxes to the Philippines for between $40 to $80 — cheaper than it would cost to send a box across the street. Nunga, who founded one of the first door-to-door companies in 1985, said the box sizes were set large to maximize the space inside standard shipping containers.

The contents of a balikbayan box are shaped by history, colonialism and Filipino ideas about family. But much of it can actually be found at Costco.

American-made or American-sold products are highly coveted. Vending machine standbys such as M&M’s, Snickers, Twix and Reese’s convey status upon relatives in the Philippines because they’re American products, which are seen as higher-quality, special-occasion foods. Colgate toothpaste, Spam and corned beef are big.

Decades of U.S colonization and influence made many Filipinos avid consumers of American culture and products, Professor Ocampo said. Generations grow up under a public education system established by an American government that uses English as the official language of instruction. And American products bound for Asian markets flowed through the Philippines and found customers in Filipinos, Ocampo said.

But boxes are more than just vessels for pasalubong, the Tagalog term for souvenirs for relatives. “The boxes show our feelings,” Jennifer Virgines of Thousand Oaks, CA said.