Filipino Bajaus Evolved Biologically For A Life At Sea

This blog entry came from the “Bodies Remodeled for A Life at Sea” (New York Times, April 2019) and “Group of People With An Amphibious Life Have Evolved With Traits to Match: Meet the Bajau” (The Economist, April 2018).

For thousands of years, the Sama-Bajau or Bajau, an indigenous group in Southern Philippines have spread out in nearby islands of Borneo and Indonesia. The Bajaus have been a nomadic, seafaring people, living off the sea by trading and subsistence fishing.[20] The boat-dwelling Sama-Bajau see themselves as non-aggressive people and successfully resisted assimilation from colonizers including the Spaniards, the Dutch, and the Americans.

The Bajaus have always been known to be excellent divers but recently they have been discovered that this indigenous groups have evolved biologically to have larger spleens to carry out the physiological feat of diving down to 200 feet in a blink of an eye. As scientists peer deeper into our genes, are we discovering instances of human evolution in just the past few thousand years?

The Bajaus are known for their excellent swimming and diving capabilities. They survive on a diet composed almost entirely of seafood. And to gather this they spend 60% of their working day underwater. They sometimes descend more than 200 feet, and can stay submerged for up to five minutes, using nothing more than a set of weights to reduce buoyancy and a pair of wooden goggles fitted with lenses fashioned from scrap glass that are resistant to distortion by the pressure at such depth — a physiological marvel. 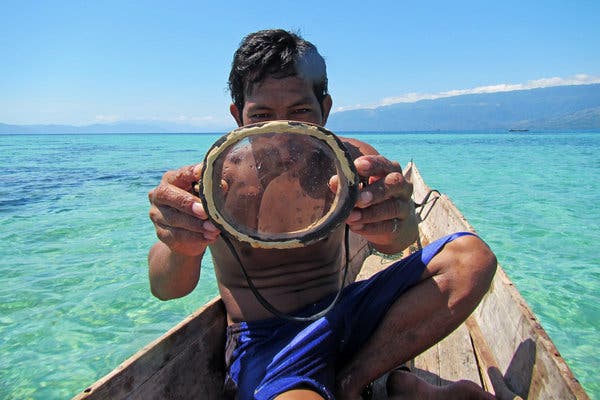 A diver with a traditional wooden mask. Some researchers suspect the Bajau only began diving when Chinese demand for sea cucumbers rose in the 1600s. Other experts believe the Bajau began earlier, at the end of the last Ice Age, when rising sea levels turned the region into islands. CreditMelissa Ilardo and the New York Times

On April 2018, the magazine Cell featured the Bajaus and that they excelled in diving not just through skill and practice. They also have developed genetically to have larger spleens to adapt to life underwater. Their spleen scans showed that the Bajaus are 50% larger than those of the control group of another nearby indigenous group, Saluan—a difference unconnected with whether an individual was a prolific diver or one who spent most of his time working above the waves on a boat.  Larger spleens helps marine mammals dive deeper. As it turns out, seals with bigger spleens can dive deepest. An enlarged spleen seems to function like a bigger scuba tank and larger spleens of the Bajaus helped them adapt and hunt fish in the ocean better.

This suggests that it is Bajau lineage, rather than the real activity of diving, which is responsible for a larger spleen. Since the Bajau have lived like this for a long time (historical evidence suggests at least 1,000 years), many researchers have speculated that they carry genetic traits which adapt them to their remarkable lifestyle.

The Bajaus are a group who literally are born to dive and have evolved into better divers. Whether that evolution was driven by the failure of those who could not dive well to collect enough food to sustain a large family, or rather, of their dying in the attempt to do so, remains to be determined. It is a new kind of adaptation — not to air or to food, but to the ocean.

“They are simply a stranger to the land,” said Rodney C. Jubilado, a University of Hawaii anthropologist who studies the Bajau but was not involved in the new study.

In 2015, Melissa Ilardo, then a graduate student in genetics at the University of Copenhagen, heard about the Bajau. She wondered if centuries of diving could have led to the evolution of traits that made the task easier for them. Her first step was to travel to Sulawesi, Indonesia, and then to a coral reef island where she reached a Bajau village. After she proposed her study, they agreed to the plan. She returned a few months later, this time with a portable ultrasound machine to measure the size of the Bajau people’s spleens.

When Dr. Ilardo compared scans from the Bajaus and the nearby group, Saluan, she found a stark difference. The Bajau had spleens about 50 percent bigger on average than those of the Saluan. Yet even such a remarkable difference might not be the result of evolution. Diving itself might somehow enlarge the spleen. There are plenty of examples of experience changing the body, from calloused feet to bulging biceps.

Only some Bajau are full-time divers. Others, such as teachers and shopkeepers, have never dived. But they, too, had large spleens, Dr. Ilardo found. It was likely the Bajau are born that way, thanks to their genes.

The only plausible way for this to happen is natural selection: the Bajau with those variants had more descendants than those who lacked them. For her own part, Dr. Ilardo suspects that natural selection favored the Bajau variant of PDE10A because deep diving is so risky. “I would think, as morbid as it is, that if they didn’t have this, it would kill them,” she said.

François-Xavier Ricaut, an anthropologist at the University of Toulouse who was not involved in the study, said that it wasn’t clear yet how quickly this evolutionary change happened.

Some researchers suspect the Bajau only began diving to great depths when a market for sea cucumbers opened up in China in the 1600s. Or perhaps the adaptation began thousands of years earlier, at the end of the Ice Age, when rising sea levels turned the region around Indonesia into islands.“This study acts as a cornerstone for exciting questions to follow,” said Dr. Ricaut, co-researcher and collaborator of Dr. Ilardo.

We are the products of evolution, and not just evolution that occurred billions of years ago. As scientists peer deeper into our genes, they are discovering instances of human evolution in just the past few thousand years.